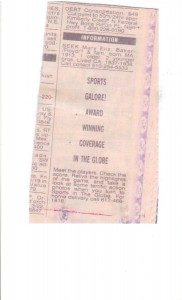 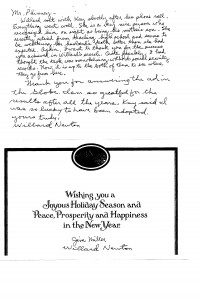 A newspaper article from March of 1997  in the Boston Globe. My wife’ saw it and knew I would interested. It read Seeking Mary Elizabeth Baker Floyd had family born in Massachusetts 1913 one older and two younger brothers and lived in California 1937 / 1938.

I called the number and spoke with Willard Newton.  He was born in 1938 in California and was put up for adoption right away.  It took from then until now actually about 20 years ago for him to obtain the only information the system would give him which was the name of his birth mother and that he had half sister about two years older.

The card reads that Willard met with Kay shortly after his phone call everything went well.  She is a very nice person who recognized him on sight as being his mother’s son.  She recently retired from teaching high school and seems to be weathering her husband’s death better than she had expected.  Again I want to thank you for the success you achieved in Willard’s search quite frankly I had thought that the task was overwhelming without social security records.  Now it is up to both of them to see where they go from here.

The second part of the card is from Willard thank you for answering the ad in the Globe I am so grateful for the results after all these years.  Kay said I was so lucky to have been adopted.  Yours truly Willard Newton.

Now for the rest of the story.

After contacting Willard and Jim Miller I did some research in Boston and found that Mary Elizabeth Floyd  was born February 16, 1913 in Haverhill, Massachusetts.  Once I knew who the mother was I then knew who his grandmother was. His grandmother was Lucy Spofford Floyd Born on March 29, 1885 in Haverhill, Massachusetts. Lucy’s parents were John S. Spofford born in 1857, her mother was Effie Parker.

On July 20, 1940 John S. Spofford of Haverhill, Massachusetts died, the informant was his wife Effie Parker.

Now the object was to find Lucy Rolfe. In my research I found a record off the death of Lucy Rolfe listed as March 7, 1968, Santa Rosa California.

Next I went searching for the death of Mary Dupont.  That search revealed that Mary Dupont died November 21, 1982 in Davis California.

Then began the search in California  marriage records and found that Kay A Baker married Frank J. Durbin Jr. on December 17, 1963.  In the end result I did find Kay Baumer, Willard’s sister. The Christmas card from Willard tells me that they met.

All of the above was made possible by a simple ad in the Boston Globe information wanted Mary Baker Floyd born 1913 Massachusetts.

About 18 months ago I was at work at the end of the day when the phone rang it was after 5 p.m. so I normally would not pick it up, but I looked at the caller ID and it was the name Kay Baumer.  I picked up the phone and a fellow asked for Al Phinney. I identified myself and he said you don’t know me but 10 or 12 years ago you did a search for my mother to find her brother.  I said no, the search was for Willard to find your mother.

He said how do you know who you’re talking to. I. said you must be calling from your mother’s home because that’s the name that came up on my ID.  He said well my mother has passed away and I tried the phone numbers that she had for my uncle Willard to inform him that she died and the number she had didn’t work but your name was still in her phonebook so I’m calling you to help find my uncle to inform him of her death.

I told them I would pull up my file and try to update from there. I gave him my e-mail address and asked that he sent me a request so that I could return the answer on his e-mail.  That night I went home and went surfing and found the current address for Jim Miller and Willard and sent it off to Greg Ford, Kay’s son.

The following day  Greg Ford called to thank me for the phone number then he asked about a search that he would like done. Currently that search has not been resolved I did try however in this case it requires a trip to California to find the original paper trail and hasn’t been done yet. This has to do with the Dawes Rolls as his father was an American Indian from Oklahoma.