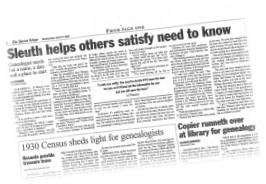 Genealogist needs but a name, a date and a place to start

MARSHFIELD – Al Phinney is an amateur genealogist, but not the sort who spends a great deal of time on dusty photographs and family trees that stretch back centuries. His work is about the genealogy of the living and the delicate business of helping the rootless find their roots. He tracks down relations lost through adoption, family rifts and other struggles. All he needs is a name, a date and a place to start looking.

“A genealogist can follow a paper trail,” he said. “If it began in Massachusetts, I can follow it anyplace.”

Phinney’s first genealogy was his own. After his parents’ divorce in 1953, his 4-year-old sister was adopted. He was 6 at the time, and he never forgot her.

“One day, my sister was gone,” he said. “I would ask questions, but no one wanted to answer them.”

After his grandfather died, Phinney found a photo of his sister dated 1959 in his possessions, proof that the older man had known where she was placed. On a visit to his grandfather’s grave, Phinney vowed to find her.

“Some day, I am going to bring my sister up here,” he recalled saying. “I am not going to let this go.”

Records of his sister from before the adoption gave him a place to start. He found his way to a small town in Maryland, the cemetery where his sister’s adoptive father was buried and a woman who knew the family. His sister was 39 when they were introduced in a hotel lobby.

Now when he’s not busy with his job as a property manager in Marshfield, he helps others satisfy the need to know. He charges clients based on how difficult the search will be. He uses only public records and leaves cases with legal ramifications to professionals.

All Phinney wants to do is find family and friends who were lost.

“If I were a millionaire tomorrow, I’d be doing it for the hell of it,” he said. “To me, it’s a puzzle. You take the pieces, put them together and eventually you see the answer. I enjoy the hunt.”

Sometimes it’s gratifying work, as when he found a mother in Maine who had given up her daughter decades before. He called her, introduced himself as a genealogist working on her family tree, and gently brought up the subject of that lost child.

“You’re calling about my little girl my father made me give up,” he remembers her saying. “I’ve been waiting for this call all my life. You come right over.”

He had a letter for her and photo albums he could show her.

“I’ve been praying all my life to know what happened to my little girl,” she told him. Now she and daughter are family.

But the hurt that drove a family apart can still be fresh when Phinney arrives. He warns his clients that they may not get the answers they want. He knows from personal experience that there’s no way to recover lost years.

“Families do have their problems, and (sometimes) someone disappeared by choice,” he said. “That’s history. You can’t change it.”

After finding someone, Phinney tells his clients what he’s learned and lets them decide what to do next. He’s willing to make introductions and will bear the brunt of rejection if the found party doesn’t want to be reacquainted.

“I walk very softly,” he said. “You need to decide if I’ll open the door for you, or if I’ll just get the information for you and you will open the door.”